Off Grid Power Systems
Let There Be Light 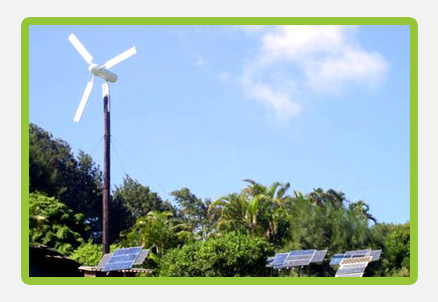 Have you been thinking about off grid power systems? Well, so have other folks . . .

"The popularity of renewable energy is exploding as millions of people around the world use clean energy to generate electricity, to heat and cool all kinds of buildings, and to produce a variety of cleaner fuels.

"Wind and solar are the fastest growing source of energy in the world. These low-polluting energy industries are also creating hundreds of thousands of new jobs in countries as diverse as Germany and China."

Renewable energy and Eco-friendly energy are perceived as the wave of the future. They're also seen by many as a way of obtaining freedom from the spider-web of the large hydro-electric producers. It's a dream of the romantic, the environmentalist and the survivalist, to create a power system that avoids all-together the entanglements of the hydro-electric corporations.

In the search for the perfect type of power system, earth's basic elements come into play. They all can be harnessed to produce sufficient and even efficient power to heat homes and run appliances and electronics. The four basic approaches are earth, water, solar and wind.

This is the most common form of alternative energy production. Sun-powered energy enters your home and runs your various devices. It requires the use of photovoltaic (PV) solar panels, batteries (often a battery bank) and an inverter. Its effectiveness depends upon the availability of the sun. While becoming more cost-effective, it's still an expensive proposition. For this reason, it's frequently used in combination with other systems.

Wind energy has some major obstacles. If the wind doesn't blow frequently or sufficiently enough in your area, little electricity is generated. Legal issues may also exist concerning the erection of wind turbines. There's also the issue of maintenance.

Micro-hydro power is produced by running water. This requires a flowing body of water such as a stream to produce electricity. As is the case with wind power, water power generation requires turbines. These have moving parts which require maintenance.

Off grid power systems can consist of different formats. Solar, wind, geo-thermal and micro-hydro are the options. All have advantages and disadvantages. Research the various methods before you decide which one is appropriate for you to handle the needs of running your appliances and electronic equipment, from large fridges to DC powered computers.